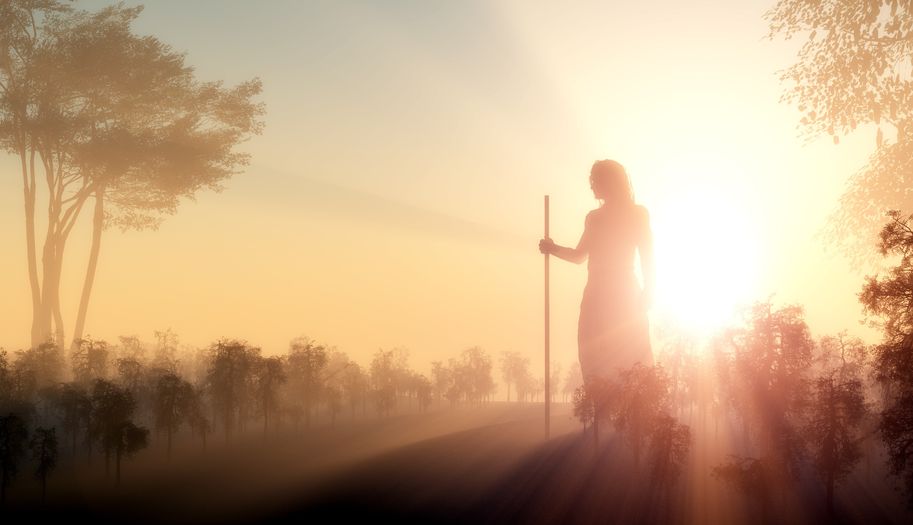 What is light. Pure light is invisible. No one has ever seen pure light. The things which we really see are the objects which the light reveals. God is light and in Him is no darkness at all. We cannot see God the Father, only as we see the light reflected in the Person of Jesus Christ do we see the Father. The sun can only be seen by its own light, so God can only be manifested by Himself. It was thus that God the Son came to reveal the Father in whom there is no darkness at all.

It may help us to understand how Jesus functions as the Light if we think of the constitution of natural sunlight, which we know is a combination of 7 colour rays – red, orange, yellow, green, blue, indigo, violet. These shining rays, forming light, are a figurative combination of the 7 Divine attributes Jesus fully possessed and manifested while in the world. There was His Love (Romans 5:8), His holiness (Luke 1:35), His wisdom (1Corinthians 1:24), His justice (Romans 3:26), His omnipresence (John 3:13, Colossians 1: 15-17), His omniscience (John 13:38), and His omnipotence (Matthew 28:18). Seven is the number of perfection.

In John ch8 vs12 Jesus stated ‘I am the light of the world’, this was right after John chapter 8 vs 1-11where an adulterous woman is brought to Him. We know the story ‘He that is without sin let him cast the first stone’. They were convicted by their own conscience and they left. She was told to go and sin no more.

CAN YOU SEE IT? Jesus in the midst of his accusers was shining His light, His attributes as God shone forth and convicted men and a woman of sin. None of her accusers sought forgiveness, none stayed to fall at His feet in repentance and adoration. They retreated into their darkness (John 3:19, 20). ‘And this is the condemnation, that light is come into the world, and men loved darkness rather than light, because their deeds were evil. For every one that doeth evil hateth the light, neither cometh to the light, lest his deeds should be reproved’. To the adulteress to whom He shined the Light, He didn’t say ‘Go in peace’s but ‘Go and sin no more’. The Light of the world was spotless. The Light in which there was no darkness at all, that pure Light shone forth. The Jewish leaders knew one of the names of the Messiah was Light, see Isaiah 42:6&7, but they preferred darkness.

Jesus goes on to say in verse 12, ‘he that followeth me shall not walk in darkness but shall have the light of life’. Those outside of Christ are given light (John 1:9) but it is not until that person accepts the Lord as their Saviour and Lord that they have the light of life. Multitudes close their eyes to the light that is given them it is too bright for them, they prefer their darkness. Darkness signifies ignorance, fear, suspicion, terror, guilt and depravity. Men cling to this rather than turning to the Light of the world and therefore the Light of Life.

If you are not saved turn to the Light of Life today while there is time.
God bless.