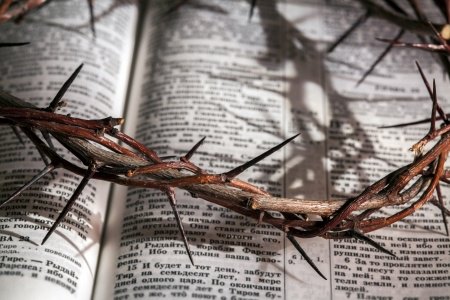 Cyrene was a prominent city in Libya. It had been founded by the Greeks. It contained many Jews, Simon being one of them. As he came in from the country through one of the city gates he was heading past the Praetorian and onto the temple to worship. He was excited to be there as it was the 15th of Nisan, between 9am and 10am, the time of the morning Passover sacrifice. He could make it to the Temple as it wasn’t very far.

Suddenly he heard a commotion and then a short way down the road there slowly emerged a strange noisy procession of people and soldiers, fronted by a man carrying a cross. The bearer of the cross looked ghastly, he struggled as he moved slowly forward. People in the crowd were being kept at bay by Roman soldiers, there were some who were dodging in and out of the procession shouting abuse making obscene gestures, others jabbering, others questioning, others jostling for a place near the condemned criminal as he was led to be crucified.. Above this cacophony of sound Simon could hear the sound of women weeping and wailing. This felt strange, Simon was transfixed as the procession crept closer he couldn’t understand it, it was supposed to be a day of celebration not a day of hard set faces spouting malicious gratification at the prisoner’s coming death. Simon then saw the crowd of women following, bewailing, lamenting, pale faced red eyed tears streaming, fear is in them dreading what is to happen to this doomed man. As the prisoner comes by him he stumbles to a stop. Before he realises it, the hand of Roman soldier lays hold of him instructing him to carry the Cross of the prisoner. ‘No,no,no not me I’m just passing by’. ‘Yes you!’ So they compelled a struggling Simon to carry Jesus’s cross. One of the soldiers held it up for him to get a hold of it. ‘Follow behind the prisoner’ were his instructions. And so he did, the prisoner paused and turned to the lamenting crowd of women ‘Daughters of Jerusalem weep not for me’ this Jesus spoke and he uttered what sounded like a prophecy. Strange this, could he be a prophet? Thoughts raced through his mind. They passed outside the city and reached the place called Golgotha. No sooner had Simon laid the Cross down than the prisoner was offered a drink, which he tasted and then refused. The prisoner was grabbed, thrown down onto the Cross, and nailed to it. Simon was shocked at the barbarism of it all. The Cross was raised and dropped into a waiting hole. This Jesus didn’t raise a cry but just bore the excruciating pain.

How long did Simon stay there? Did Jesus look at Simon, did he see the two thieves being crucified as well, did he hear Jesus’s 7 utterances as He hung upon the Cross? Did he see the darkness? Did he feel the earthquake? Did he weep? Did he look at the sign that was nailed above Jesus, ‘This is Jesus the king of the Jews’? How on earth is this noble man a criminal? Could he be a king? That would make him my king!!!!?????

Simon no doubt stayed in Jerusalem until Pentecost. During those 7 weeks never a day passed without him thinking about that man Jesus. Since then he had learned a great deal and the more he learned the more he wanted to know. The common people said there was no one like Him. Others saw Him as the long awaited Messiah. Then there was talk of His resurrection.

And so the weeks passed and the day of Pentecost dawned. Simon goes to the temple. There are many people there, 3,000 for sure. He struggles forward and sees the men of Galilee speaking to the crowd in different languages. There were men from all over the known world, Parthians, Mede’s, Elamites, ‘the parts of Libya about Cyrene’ (Acts2: 9-11). What a crowd. There’s something supernatural about this, as the praises of God ascend upwards. There’s a tone of authority coming from one of the speakers. Jesus is the Christ. Yes, yes. As the call for repentance came Simon saw Jesus as his Christ and asked Him to save his soul. It was then the sound of the rushing of a mighty wind and God’s Holy Spirit came upon Simon and those 3,000 souls.

Amazing, wonderful, Simon went home a changed man. He told his sons (Mark 15:21) Alexander and Rufus and his wife. From his witness all three accepted Jesus as their Saviour. As the years passed his sons became two outstanding Christian leaders. Church historians believe that Alexander was martyred. Rufus and his mother were well known in Rome, when Paul wrote the book of Romans in chapter 16 we read ‘Salute Rufus chosen in the Lord, and his mother and mine’ : obviously at some time Paul had been in Rufus’s home where his mother had cared for him – note ‘and mine’. A strong close motherly relationship was experienced by Paul.

In conclusion I can plainly see God’s Providence at work in the lives of Jesus, Simon, Alexander, Rufus and their mother. God puts us in the right place at the right time that he might work His works through you. Friends we can rest in the fact that God is behind the scenes directing events And friends life is not a series of accidents but a series of appointments.

Have you experienced God’s Providence in your life?
God bless