The Crown of Thorns 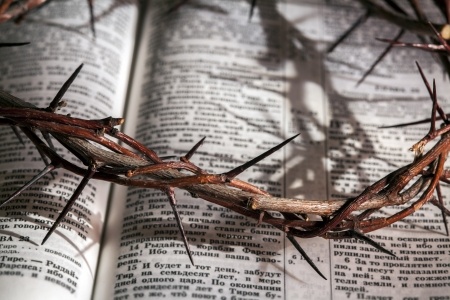 Looking at Matthew 27 vs 29 we read ‘And when they had plaited a Crown of thorns, they put it upon his head, and a reed in his right hand : and they bowed the knee before Him, and mocked Him, saying ‘Hail King of the Jews!’ And they spit upon Him, and took the reed, and smote Him on the head.’…….. Such cruelty and viciousness as those thorns pierced His lovely brow.

If only they had known what they were doing, but they were blinded. Here was the creator and sustainer of the universe, Emmanuel brought down to His deepest shame silently bearing the excruciating pain as He was set at nought.

Let us consider this garland of thorns.

The material of the Crown.

Thorns were not part of God’s creation, it was a thornless world. Thorns were the result of man’s disobedience, sin. Gen ch3 vs 17,18. The fall and the world was then plunged into the abyss of sin. The curse.

The making of the Crown.

The Crown was plaited, made by men playing with thorns, playing with sin no doubt, pricked by the thorns themselves staining the Crown with their own blood.

The misery of the Crown.

Jesus was set before the Roman soldiers naked but for a purple robe, with a garland of thorns for a Crown, a reed for his sceptre. And a royal salute for his coronation ‘Hail King of the Jews’. What humiliation. No doubt His sacred head was wounded and a river of blood ran down as a soldier used the reed to push the Crown further onto the His head. The agony he suffered in silence.

The mockery of the Crown.

Jesus Christ was born King of the Jews, He came from a heavenly throne but here he was mocked, ridiculed, hated and scorned. They ridiculed his character, they repudiated his claims, they rejected his compassion, they refused his commandments. They were mockers.

The meaning of the Crown.

The thorns speak of the curse on the world, here the thorns found a place to rest; the curse rested on the head of Jesus, here is the person the object of the Father’s wrath, someone must suffer. The sentence must be carried out, the curse is passed from my head to the head of Jesus, the Lord of Glory. Jesus has born my curse, He is my substitute. Victory over the devil, hallelujah!

The mystery of the Crown.

It is a fulfilment of scripture. See Genesis 22. Abraham offering his son Isaac as a sacrifice, a type of Christ. The angel stops Abraham from slaying his son. Abraham lifts up his eyes and sees a ram with its head caught in the thicket By faith Abraham saw in that thicket thorns and briars encircling that rams head. The Crown of thorns in type. He saw the meaning of substitution and resurrection. It was all possible because the head of the ram was encircled by thorns. The Crown was not a Crown of shame then but a Crown of victory. This Crown of thorns speaks of the security of the believer.

The message of the Crown.

The message of the Crown is twofold. It speaks of dark perdition where you make it a Crown of rejection, where you crucify afresh the Lord of Glory and put Him to an open shame.
Or you can let it speak to you of a glorious pardon and Crown Him the Lamb upon the throne of your heart. I hope you can sing that hymn with meaning where it says
I love thee for wearing the thorns on Thy brow
If ever I loved thee my Jesus tis now!
God bless,