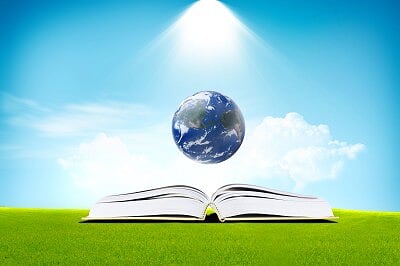 Genesis Chapter 1 vs 1 states. ‘In the beginning God created the heaven and the earth’. The word beginning speaks of time. The word heaven speaks of space. The word earth speaks of matter.
Time, space and matter the three necessary ingredients in God’s creative act.

I notice that when I look at verse 1 the word heaven is in the singular. The scripture reveals there are 3 heavens, the atmosphere, another where the stars are, and a third where God is.
So the Lord on the first day created the first heaven (the atmosphere) and the earth. Notice the word ‘and’, it’s a conjunction it’s a linking word there is a lot of them linking the creation week together the next conjunction says ‘And the earth was without form and void; AND darkness was upon the face of the deep And the Spirit of God moved upon the face of the Waters’.

I am not one those people who believe there was a gap of possibly millions of years between verses 1 & 2. Why? In context we notice the earth was completely covered in water (the deep). The land had not yet appeared had not been raised up from the floor of the Seas, that didn’t happen until the third day. The earth was void there was no life in it yet. The Spirit of God, moved or brooded over the face of the Waters. God then creates light.

On the second day God moves some of the Waters above the waters so there is a water canopy above and surrounding the whole earth. Making the whole earth a tropical paradise. (Remains of orchids have been found in the perma-frost) In Noah’s flood this canopy collapses and it rains for 40 days and nights.

On the third day God brings up from the bottom of the deep the dry land in one big piece.

The fourth day of creation God created the sun, moon and stars (our planet was here first) and so the creation week continues. In context it is quite simple to see and understand.
For those who believe in the gap theory I do not see my perfect all-knowing God having to start again. Neither do I believe in the evolutionist Darwinian theory of millions of years fitting between verses 1 and 2, all Darwin is really saying is the Bible is a lie, there is no God and therefore we are not accountable to Him.

From Genesis 1:1 to 3:6 all was very good. No pre-adamic disastrous race, with a fallen Satan causing death and destruction. How can we be sure of that! Turn to Ezekiel ch28 verses 11 to 19 speaking of Lucifer son of the morning, look at verse 13 the anointed cherub was in the garden of Eden in his angelic glory this was before the fall of Adam and therefore before Lucifer’s rebellion against God. Surely this means that between the creation of Adam and Adam’s Temptation Lucifer fell. How long that period of time was we don’t know but it couldn’t have been too long. So no Darwin’s theory,no gap theory, no pre-adamic theory, all dispelled all out the window, gone.
(It makes me think. Did God’s relationship with Adam and Eve affect Lucifer, was he jealous, did this add fuel to the fire of his eventual rebellion against God? After all he was God’s top angel – pride cometh before a fall.)

Food for thought and prayer.